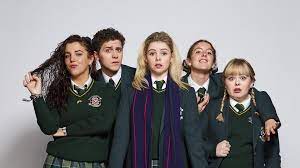 If you are looking for a tv show to binge watch over the weekend, then I highly recommend Derry Girls.  It is an easy show to breeze through! You might learn something about where the show is set: Ireland.  I was quite intrigued by the cuisine and candy that appeared in the show as well as how the small town, Derry, looked (very different from the US!). After reading this review, hopefully you will be interested in watching Derry Girls!

Derry Girls is a tv-series on Netflix set in the 90’s during a time when armed Irish troops were placed in Derry. Four girls and one boy attend a catholic school for girls in Northern Ireland. The five teenagers (Erin Quinn, Clare Devlin, James Maguire, Orla McCool, Michelle Mallon) share an unbreakable bond one cannot imagine. From the first episode to the last, the teengers set upon new journeys that always end up in hilarious dilemmas or flames-literally. Though they do cause a lot of trouble, what matters is that they are always there for each other.

You might assume right away that the actors are young adults. I was completely convinced that they were all at the age of twenty too, but they were in their mid twenties when they started filming. Nicola Coughlan (Clare Devlin) is actually the oldest in the group—34. Clare tends to talk fast and her voice is more high pitched than Devlin’s. In an interview with The Late Late Show, Ireland’s most popular chat show, Devlin reveals that she “could only think of Nadine Coyle” in order to nail that classic Clare accent—Nadine Coyle is an Irish singer by the way.

Michelle Mallon (Jamie-Lee O’Donnell) is the rebel in the group and tends to get the gang into trouble sometimes. I think she’s hilarious because she is always picking on her cousin, James, and constantly swears. A personal favorite moment of mine is when Michelle and the group find themselves in deep trouble at a funeral- it was really Michelle who got them in trouble. They must find a batch of “joke” scones before anyone else eats them. However, once they gathered the scones they believe they have prevented a catosopthe from happening, but, oh boy, were they wrong! In the end, Erin’s poor family will soon find themselves in a frenzy.

Honestly, there’s not much negative aspects about Derry Girls that I can think of. However, I do wish the episodes were longer than 24 minutes. I know the shorter episodes is what makes this show binge worthy, but adding more time plus a few extra episodes per season wouldn’t hurt. Once you finish Derry Girls, you might disagree with my opinion, which is completely fine as long as you enjoy the show, that is all that matters!

Overall, I would give Derry Girls a solid 9/10.  It is a hilarious sitcom show that never fails to put a smile on your face. You don’t have to worry about any spoilers or important details that you might have missed while you do chores or play on your phone. It is also a show you can watch more than once and still enjoy without getting tired of it.  You should definitely watch Derry girls if you are looking for a show to binge watch within a short amount of time. You will love it!