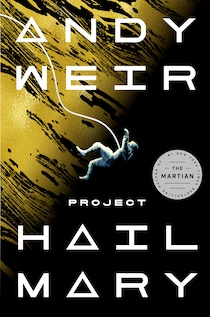 Ryland Grace awakens from a coma to find himself the only survivor aboard a ship farther from Earth than anyone has ever ventured. He does not know why he is out here and his crew is dead, but as his memories return, the horror of his situation sinks in. He has been sent on a suicide mission to prevent an anomaly from ending all life on Earth. With his only associates dead, Ryland stands before a greater task than anything ever faced: save a planet from certain doom by himself.

But is he truly alone in the darkness?

Published on May 4, 2021, Project Hail Mary is the latest novel from Andy Weir, author of The Martian. A hard science fiction novel that builds the plot from a foundation of biology, chemistry, and physics. Weir’s prose immerses the reader by making the protagonist their equal in the opening act: curious and picking up shreds of knowledge as time elapses and pages turn. Ryland and the reader learn alike in starting with nothing.

Flashbacks merge Ryland’s murky past with the dire present. He is no more of a hero than the rest of us, a flawed man who is afraid and uncertain. Ryland is as dumbfounded as the reader when he discovers that his only chance to save humanity is to join forces with an alien in the same trouble as him. Together, they face frustration, reluctance, terror, and desperation as precious time withers away.

The character development is inventive, but it creates a few bumps in the plot’s continuity in the middle section. Nonetheless, Weir weaves a yarn of epic proportions, and anyone looking for page-turning action combined with pensive insight will find themselves a great read in Project Hail Mary. From any standpoint, I would recommend reading this book.